Do chinchillas need probiotics? Chinchillas don’t need regular supplementation of probiotics, although they may be beneficial in certain circumstances. Probiotics can replenish a chinchilla’s gut bacteria after it’s sick or it takes antibiotics. But they may also have severe side effects like bloating. Talk to your vet before administering them.

The guide below first looks at what probiotics are and what they do, before addressing their side effects. We’ll also touch on the various brands of probiotics for chinchillas (believe it or not, but some are completely unsuitable!)

Chinchillas don’t need probiotics because when they would be most ‘helpful’, a trip to the vet or a correction of its living conditions would likely be more helpful. While they are almost always safe for your pet to take, their benefits have been largely exaggerated, while their potential side effects have been ignored.

That being said, many owners report that they do help their pets, so they may be worth your consideration if your chinchilla is constipated or generally unwell. If you do plan on giving them to your chinchilla you should consult a vet first.

Probiotics are a kind of supplement, but they don’t work in the same way that other supplements do.

Most supplements are of vitamins or minerals that a person (or pet) needs. While there is conflicting evidence on whether they work or not, the body definitely needs certain things like calcium or vitamin C. But probiotics contain bacteria, not vitamins or minerals—bacteria that assist the digestive process. All animals have bacteria inside them for this purpose.

Probiotics come in both liquid and tablet form. They typically contain many kinds of bacteria, not just one, as a healthy gut has lots of different kinds. There are ‘gram positive’ bacteria and ‘gram negative’ bacteria, which is related to how thick the cell wall of each bacterium is. Then there are different species, like Lactobaccilus, Bacillus subtilis, Enterococcus and Acidophilus. Probiotics should ideally have a mixture of these and others.

What Do Probiotics Do?

Probiotics supposedly restore ‘healthy’ bacteria to the gut. These bacteria can be killed by antibiotics, or through having a generally poor immune system. Manufacturers claim that replacing them with probiotics can promote healthy digestion and assist the immune system.

Like other forms of supplementation, the actual effects of probiotics are debated. The Federal Trade Commission have rejected advertising claims by popular probiotics manufacturers like Danone, stating that the evidence for more exaggerated claims (like preventing colds or relieving constipation) simply isn’t there. The European Food Safety Authority has made similar moves in the European Union.

That hasn’t stopped people (and their pets) from enjoying taking probiotics, and feeling an effect of some kind.

Would Probiotics Kill My Chinchilla?

Listed side effects of probiotics can include gas and bloating, constipation, and thirst. These are extremely unlikely to occur, but they can.

The precise side effects on chinchillas have not been studied, and these have only been documented in people. But it’s worth knowing that probiotics a) aren’t a magical cure-all, and b) aren’t 100% safe.

If these side effects were to affect your chinchilla, they could be quite severe. Constipation and bloating are particularly bad for your pet; severe cases can kill it. That’s why you should consult a vet before making dietary or supplemental changes for your chinchilla.

Why Would a Chinchilla Need Probiotics?

Some owners will give their chinchillas probiotics in certain circumstances, such as:

Probiotics may also be helpful after your chinchilla takes antibiotics. One of the side effects of taking antibiotics is that they kill ‘good’ gut bacteria. This can make digestion less effective, but they can be replaced with probiotics and a healthy diet. If your chinchilla needs to take antibiotics, e.g. because of a respiratory infection, talk to your vet about the potential benefits of probiotic supplementation afterwards.

You can give your pet chinchilla probiotics so long as:

There are two kinds of probiotic. The first is in pill form, and the second is in liquid form. You should avoid giving your chinchilla any dairy-based liquid probiotic as chinchillas are lactose intolerant. After they wean from their mothers’ milk, they never drink milk again (people are the only animals that do that!) You should also check the pill to make sure it doesn’t have lactose in it, as many do.

Below are two common probiotics that chinchilla owners mention on forums and in groups. We aren’t paid to mention or link to them, so this is an honest review.

One of the most well-known probiotics for chinchillas is Pro C Probiotic. This is a probiotic made especially for small animals, and it contains other supplements like vitamin C. Reviews for this product are positive, so owners do seem to have positive experiences with it.

One thing to note is that chinchillas do not need vitamin C supplementation. That’s because chinchillas are one of many animals that can make their own vitamin C inside their bodies. Humans are actually unusual because they lack this ability, as most animals can do so. So, don’t take the fact that Pro C Probiotic has vitamin C in it as a reason to buy it.

Another problem we’ve noticed is that it contains dextrose. This is advertised plainly on the front of the tub, presumably because dextrose sounds like something useful—but it’s actually pure sugar made from corn. It’s chemically identical to glucose.

This is surprising since Vetark advertise this product for “frequent and routine use”. If you didn’t know, chinchillas should never eat processed simple sugars, only complex carbohydrates/fiber. This is part of the reason why feeding fruit to a chinchilla is a bad idea.

Another option, this one specifically for chinchillas, is Exotic Nutrition’s ‘Chinchilla Booster‘. This product has at least been designed with chinchillas in mind rather than small pets generally, which is one advantage over the Pro C Probiotic. It’s intended as a generall chinchilla vitamin/chinchilla supplement, but it does contain yeasts and probiotics, which is why it’s included here.

You can tell that the manufacturers know at least a little about chinchillas because it doesn’t contain vitamin C. It does contain lots of B vitamins and calcium, though, both of which chinchillas need. The page is also at pains to point out that if your pet is already getting an appropriate diet, then it won’t need Chinchilla Booster or any other supplement. So that’s two bonus points, one for honesty, and one for knowing that chinchillas don’t need supplemented vitamin C.

As such, if you are going to give your chinchilla probiotics, we would recommend giving it this product rather than the one above. You should talk to your vet before administering any chinchilla vitamins, supplements or probiotics. 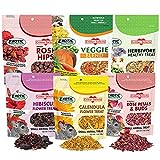 (44)
$26.99
✔ 100% NATURAL - no added color, flavor, or preservatives ✔ HERBIVORES - Suggested for: squirrels, guinea pigs, rabbits, chinchillas, prairie dogs, degus, hamsters, gerbils and other herbivores. ✔ FORAGING - Small size enables you to put in toys to e... read more
(as of July 24, 2021 - More infoProduct prices and availability are accurate as of the date/time indicated and are subject to change. Any price and availability information displayed on [relevant Amazon Site(s), as applicable] at the time of purchase will apply to the purchase of this product.) 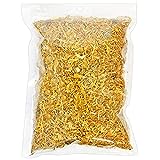 (7)
$17.99 ($17.99 / Ounce)
✔ HEALTHY - Has a low energy content, but contains plenty of fiber. ✔ GOOD FOR FORAGING - Small size enables you to stuff inside toys to encourage natural foraging instincts. ✔ HERBIVORE TREAT - Dried flowers are a favorite food of herbivores like De... read more
(as of July 24, 2021 - More infoProduct prices and availability are accurate as of the date/time indicated and are subject to change. Any price and availability information displayed on [relevant Amazon Site(s), as applicable] at the time of purchase will apply to the purchase of this product.)

(19)
$15.99 ($8.00 / Ounce)
✔ SUPPLEMENT - Vitamin & mineral supplement for chinchillas. ✔ PROMOTES DIGESTION - Includes live saccharomyces yeast for a healthy digestive tract. ✔ PROBIOTICS - Contains probiotics that prevent colonization of pathogenic bacteria. ✔ MULTI-USE - Gr... read more
(as of July 24, 2021 - More infoProduct prices and availability are accurate as of the date/time indicated and are subject to change. Any price and availability information displayed on [relevant Amazon Site(s), as applicable] at the time of purchase will apply to the purchase of this product.)

Chinchillas enjoy greens and veggies, but they aren’t always a health choice. So what about spinach? Is it nutritionally adequate, or might it cause bloating?