Treats make chinchillas happy, even if they aren’t strictly necessary. Most owners feed fruits and vegetables; but are they suitable? And if not, why can’t chinchillas eat apples, since fruits are typically healthy?

Can chinchillas eat apples? They can, but apples aren’t healthy snacks for chinchillas. They contain far too much sugar and water, and are sweet and easy to eat, so will make your chinchilla overweight if fed regularly. This applies to all varieties of apple fed in even small quantities, and includes red and green apples. Instead, you should feed your chinchilla snacks like rose hips, herbs and different kinds of hay.

The guide below is based on real scientific evidence, not what one owner or another thinks. We’ve backed up this claim with nutritional info and research into a chinchilla’s vitamin/mineral and nutrient needs, which is why we’ve come to a different conclusion to most other chinchilla sites out there!

Chinchillas can eat apples easily. They have such big, sharp teeth that they could even easily break into a whole apple even if it weren’t cut up.

But apples and fruits generally aren’t as healthy as you might assume. The problem is that they contain far too much sugar and far too much water for your pet to handle. Wild chinchillas hardly eat any pure sugars like fructose, instead relying on more difficult-to-digest fiber. Believe it or not, but fruit like apples can even make chinchillas overweight or give them diabetes. That’s why we recommend sticking to safe treats instead.

Chinchillas will gladly eat any kind of sweet snack, apples included. That’s why so many owners give their chinchillas raisins as snacks.

But just like how sweet or fatty snacks are so often bad for us, so too is that true for chinchillas. The problem is that all animals have an instictual drive to eat as many fatty and sugary foods as possible. That’s because in the wild, high-calorie foods are hard to come by. Eating as much as you can in one sitting could help you survive when there’s less food around. But because these foods are available for us or our pets all the time, we can make the wrong decision and eat far too much over time. That’s how being overweight happens.

So, yes: chinchillas do like apples, but that doesn’t mean you should feed them.

Are Apples Poisonous to Chinchillas?

Apples aren’t poisonous to chinchillas. Your pet won’t keel over and die the moment it has some.

Rather, apples pose a long-term risk to your pet’s health, gra. As such, they’re more akin to processed food than anything poisonous. But exactly why are apples bad for chinchillas?

Are Apples Good for Chinchillas?

Apples aren’t good for chinchillas because they’re very high in sugar and very high in calories (relatively speaking). We think of fruits as healthy foods, and in many ways, they are: they contain vitamins and minerals, and are lower in calories than processed human foods. But for a chinchilla, they make a very unhealthy snack.

While there are many kinds of apple, the nutritional content of each variety is broadly similar to the rest. Here is a table with data from NutritionValue.org that shows how much of each key nutrient regular apples have:

The low fat content isn’t a problem for chinchillas—but almost everything else is. 52 calories per 100g of food may not seem like much, and it’s not. The hay that a chinchilla eats is around 200 calories per 100g. So, you might think that apples would help your pet lose weight, if anything; but that’s not the case.

To understand the problem, we need to look at how chinchillas eat, and what nutritional requirements they have. Chinchillas eat 5% of their body weight per day, so if your chinchilla weighs 500g (roughly average), it will eat 25g of hay. Timothy hay contains between 45-50 calories per 25g, so that’s about your chinchilla’s daily calorific needs. A piece of apple the size of your thumb will weigh around 15-20g, which is 8-10 calories.

What makes the difference is that chinchillas eat apple very quickly, while they eat hay slowly because they need to break it down. It’s like the equivalent of potato chips: not as calorific as a full meal, but very easy to eat. And remember, your chinchilla will continue to eat hay on top of the snacks you give it, which is how it will gain weight.

Also, calories don’t come from fat and protein. They come from the carbohydrates in apples, specifically the sugar (fructose). Chinchillas don’t need any kind of sugar; they only need fiber. Apples don’t contain enough fiber for chinchillas. This is bad for your pet’s teeth and gut. Plus, since chinchillas eat so little pure sugar in the wild, they aren’t used to it; they’re therefore highly susceptible to diabetes when fed a high-sugar diet.

Meanwhile, chinchillas need more protein than can be found in apples, too. The high amount of water is another problem. Chinchillas are experts at conserving water because they come from a dry habitat. Having an excess of water in their food can give them diarrhea. All of this put together means that apples are a terrible choice of snack for your pet.

Vitamins and Minerals in Apples

What stands out here is the apple’s reasonable vitamin C content. They don’t contain anywhere near as much as oranges, for example, but any amount is good.

However, giving a chinchilla vitamin C in its food is entirely unnecessary. The chinchilla is one of many animals that can synthesize its own vitamin C internally; in fact, humans and other apes are among only a small number that can’t. Among the rodents, it’s only the guinea pig that can’t do this. As such, the apple’s vitamin C content isn’t of any use to your pet.

As for the other vitamins and minerals, it’s better that they’re in apples than not. But there are far better ways to give your chinchilla these vitamins and minerals. Here, apples are the equivalent of a seriously unhealthy sugary breakfast cereal that’s fortified with a few vitamins; sure, the vitamins are good, but the sugary cereal certainly isn’t. So, any benefit they bring is more than outweighed by the health issues they cause.

How Much Apple Can Chinchillas Eat?

We would recommend none at all.

Chinchillas can get by without any snacks at all. Unlike people, chinchillas don’t have any need for a varied diet. They can get all the vitamins and minerals, carbs, protein and fat they need from hay. This may seem surprising as hay seems like such a plain and un-nourishing food, but it’s true. As such, no snacks are strictly necessary, let alone unhealthy ones.

If you must give your chinchilla apples, at least control the portion sizes you give. Don’t give your chin large slices; instead, cut the apple up into tiny chunks 1/2in or 1cm across.

How Often Can Chinchillas Eat Apples?

We would recommend ‘never’. There is no nutritional need for apples in a chinchilla’s diet, and chinchillas don’t need snacks of any kind. They can thrive on a diet of hay alone, with the only typical issue being a lack of calcium; this can be solved with using cuttle bones as chew toys. Besides, there are many snacks like rose hips that don’t have any more calories than regular hay, so won’t make your chinchilla gain weight or get diabetes.

Should You Feed Your Chinchilla Apples?

It may seem overly cautious to say your chin shouldn’t eat apples. They aren’t poisonous, and the occasional high-calorie snack won’t make your chinchilla unhealthy. In this regard, they’re similar to high-calorie human foods. One cheeseburger won’t kill you, but ideally it’s best not to eat them.

The key difference is that your chinchilla doesn’t know about apples unless you feed them to it. It’s not missing out on anything if you cut them out. And instead, you can feed your pet safe treats like rose hips, flower petals and hay with herbs in it. All these treats get your chinchilla excited, and none of them have too many calories or too much sugar. This makes them a far better choice than apples. 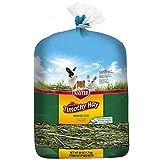 (4237)
$12.99 ($3.46 / lb) $9.99 ($2.66 / lb)
Wafer cut to peel off in layers makes feeding easier and less messy Naturally grown without pesticides Grown specifically for small animals High fiber to support digestive health America's #1 Hay Brand All Natural non GMO ingredient No artificial pre... read more
(as of May 8, 2021 - More infoProduct prices and availability are accurate as of the date/time indicated and are subject to change. Any price and availability information displayed on [relevant Amazon Site(s), as applicable] at the time of purchase will apply to the purchase of this product.) 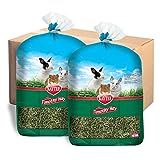 (6101)
$37.99 ($3.17 / lb) $31.98 ($2.66 / lb)
Naturally grown without pesticides Grown specifically for small animals High fiber to support digestive health America’s #1 Hay Brand All-natural non GMO Ingredient No artificial preservatives
(as of May 8, 2021 - More infoProduct prices and availability are accurate as of the date/time indicated and are subject to change. Any price and availability information displayed on [relevant Amazon Site(s), as applicable] at the time of purchase will apply to the purchase of this product.) 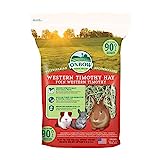 $21.99 ($0.24 / ounce) $19.12 ($0.21 / ounce)
PROUDLY GROWN IN THE USA: Harvested fresh from Oxbow?s family of farms by our expert hay growers˜ PREMIUM QUALITY: Hand-sorted and hand-packed with care. All Oxbow hay growers are trained in the production of premium hay 100% ALL-NATURAL HAY: All-nat... read more
(as of May 8, 2021 - More infoProduct prices and availability are accurate as of the date/time indicated and are subject to change. Any price and availability information displayed on [relevant Amazon Site(s), as applicable] at the time of purchase will apply to the purchase of this product.)