Bananas are a fruit, and fruit is healthy. But are bananas healthy for chinchillas, or could they be unhealthy, even poisonous?

Are bananas good for chinchillas? They aren’t poisonous, but are unsuitable as they contain far too much sugar. They contain lots of fructose (fruit sugar) which your chinchilla’s gut isn’t used to, and will make it become bloated. We recommend avoiding them completely.

While you can serve small portions, this is a pointless exercise as there are many snacks that a) won’t make your chin overweight even in large quantities, and b) your chinchilla will love. So instead, suitable snacks for chinchillas include rose hips and hay with herbs in it.

Chinchillas can physically eat bananas—but aside from that, there’s no way in which bananas are suitable for chinchillas.

The core problem is that they are a dense food which contains too much fructose (for a chinchilla) even in small servings. Chinchillas are used to hay, and they have to eat a lot of it to survive. Both wild and pet chinchillas will forage throughout the day and night to get enough energy from hay. That’s not because there’s anything wrong with hay; it’s how chinchillas are adapted to live.

But when a chinchilla has a sugary food that their gut isn’t used to, they become bloated, and bloating can be fatal.

Chinchillas like any kind of sweet foods. They prefer sweet hays, for example, and will eat any fruit you give to them. So, your chinchilla would like the taste of the banana, although it would prefer foods that are more fibrous.

A good example of this is raisins. Chinchillas love to eat raisins, and many owners think they’re a great snack. But if anything, they’re worse for chinchillas than bananas, and should be avoided. This means bananas (and any fruit) are like candy to chinchillas: easy to eat and containing too much sugar. Fruit’s vitamin content doesn’t make up for that.

Are Bananas Poisonous to Chinchillas?

The problem isn’t that bananas are poisonous for chinchillas. It’s that they’re very unhealthy.

This might come as some surprise, as fruit is seen as perhaps the healthiest food there is. That’s largely because of its vitamin and mineral content. But what’s healthy for one animal isn’t necessarily healthy for another, and that’s certainly the case here.

Bananas are not good for chinchillas in any way. While they do contain some vitamins and minerals, these your pet should get from its regular diet of hay alone. And beyond that, bananas are in no way good for your chinchilla. If anything, they’re actively bad, like candy and other unhealthy snacks that we might have.

All varieties of banana have roughly the same nutritional content. Here is a table with data from NutritionValue.org that shows exactly how much of each key nutrient bananas contain:

If you know a lot about chinchillas, you may already see what’s wrong with bananas. They contain too much pure sugar, too much water, too many calories, not enough fiber, not enough fat and not enough protein—so, they’re unsuitable in every way!

The biggest problem is the sugar content. Fruit is mostly water and carbohydrates, and while carbohydrates aren’t the enemy, pure sugar isn’t good for chinchillas. A chinchilla’s diet of leaves and grass contains almost no pure sugar: only complex carbohydrates like fiber.

A chinchilla’s gut is set up perfectly to deal with this fiber, not lots of sugar. Like us, if it has too much sugar, a chinchilla will gain weight or could develop diabetes. While you likely aren’t planning to feed your chin nothing but banana, even irregular snacks can make your pet gain weight. It’s the fructose content of bananas that’s the problem. Chinchillas eat hay, which has around 200 calories per 100g. Bananas have around 89.

As for how this will affect your chinchilla’s weight, you can figure it out with math: chinchillas eat 5% of their body weight per day, so if your chinchilla weighs 500g (roughly average), it will eat 25g of hay. Timothy hay contains between 45-50 calories per 25g, so that’s about your chinchilla’s daily calorific needs.

A piece of banana half the size of your thumb will contain around 10 calories. That seems like next to nothing, but as you can see, these small numbers look bigger when you’re the size of a chinchilla. Plus, it only takes a moment for your chinchilla to eat that much banana, while it has to forage for a long time to eat the equivalent in hay. So even tiny amounts of banana could make your pet overweight if fed regularly.

On top of that, bananas don’t give chinchillas what they need. Chinchillas need 16-21% protein and 2-4% fat in their diets. Bananas offer 1.1% and 0.3% respectively, so not enough. This isn’t a major problem as your chin would get what it needs from its core diet, but considering there are snacks that meet these needs, it makes sense to feed these instead.

It’s the water content that poses the bigger problem. Chinchillas are from a dry climate, so have adapted to low water intake. That’s why hay makes such an effective food, as it contains little water; the chin can moderate its own water intake with its water bottle. The water in fruit can give a chinchilla diarrhea.

Vitamins and Minerals in Bananas

One way in which fruit beats processed food is its vitamin and mineral content. Bananas are a particularly healthy fruit in this regard, as you can see in the table below.

Bear in mind that animals don’t need an equal amount of each mineral or vitamin, so small amounts of one may be sufficient while large amounts of another may not. But each item in the list above represents something that bananas have lots of, relatively speaking.

That being said, your chinchilla shouldn’t need to eat fruits, vegetables or anything else solely for its vitamin and mineral content. That’s because chinchillas get all the nutrients they need from hay, and hay alone. As such, foods that have lots of nutrients could actually cause an overdose of certain minerals or vitamins. Excess doses of things like calcium can cause bladder stones, for example, and impact your pet’s health. So the vitamin and mineral content of bananas isn’t relevant for your pet.

Another interesting point is that while bananas do contain reasonable amounts of vitamin C, that doesn’t mean they’re good for chinchillas either. That’s because chinchillas make their own vitamin C, so they don’t need to get it from food. Humans are one of the few animals that can’t do this.

While dried banana doesn’t have the water content that regular banana does, that doesn’t mean you should feed it. If anything, it’s worse.

The problem is that dried fruit is rarely actual dried fruit. Instead, most dried fruit is candied fruit, and there’s a big difference. Dried fruit is left to dry, with nothing added to it and nothing taken away. While this still isn’t suitable for your chinchilla because of its sugar content, it’s at least no worse than regular banana.

However, candied fruit is fruit that has been dried with lots of syrup added to it. Fresh fruit is soaked in sugar syrup, then heated until the water in the fruit is replaced with the syrup. This means that things like banana chips might be even worse for your pet than regular banana.

You can often tell the difference between dried fruit and candied fruit by looking at it. Real dried fruit is shrunken, dried and brown. It’s chewy and tough. Candied fruit is brittle, light and very sweet. You can also check the packet to see what it is (although we don’t recommend any kind of banana, candied, dried, fresh or otherwise).

How Much Banana Can Chinchillas Eat?

We would recommend not feeding your chinchilla any banana at all. That’s because you take on the role of a parent if you adopt an animal with complex care needs; it’s your job to look after it, and you should do it properly. There are lots of snacks your chinchilla will enjoy as much as banana, but which meet its nutritional needs correctly, so we recommend feeding these instead.

If you are going to feed your chinchilla banana, you should tightly control the portion sizes you feed. What seem like tiny differences in portion size to you are actually large to a chinchilla. So, only feed small portions as big as your little fingernail, if any at all.

How Often Can Chinchillas Eat Bananas?

Similarly, we would recommend never giving your chinchilla banana. There’s simply no need: they serve no nutritional purpose, while there are other snacks like rose hips and herbs that don’t damage your chinchilla’s health.

Again, if you insist on feeding banana anyway, at least limit how often you do give it to your pet. Once a week should be your limit. In between these feedings, offer your chinchilla more suitable treats instead.

On balance we recommend entirely against feeding your chinchilla bananas. There’s certainly no nutritional need for them; chinchillas don’t eat fruits like bananas in the wild, so your pet isn’t missing out on any vitamins or minerals it can’t get anywhere else, and if you give it healthy treats on occasion then it will be just as happy as if you did give it banana. 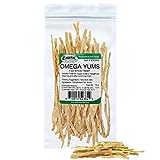