Wild chinchillas likely eat nuts and seeds, when they find them. So should you feed a pet chinchilla peanuts? And if not, why not?

Can chinchillas eat peanuts? They can, but peanuts of all kinds are nutritionally unsuitable for chinchillas. That includes roasted nuts, raw peanuts, unsalted and salted, and even monkey nuts still in their shells. They are too high in fat and calories so can make chinchillas overweight. They also don’t contain enough fiber or carbohydrate for your chinchilla’s gut, so may cause bloating. Feed your chinchilla safe snacks like rose hips, sweet hay or shredded wheat instead.

The guide below details exactly why chinchillas shouldn’t eat peanuts, by looking at their nutritional content vs. the nutrients a chinchilla needs. We’ll also look at some of the side effects that peanuts are likely to cause (and they aren’t pretty). And for anybody who is going to insist on giving their chinchilla peanuts, we’ve also made recommendations on serving sizes that, while not good for your chinchilla, at least aren’t likely to cause it significant harm.

Chinchillas can physically eat peanuts. They have big, strong teeth that can easily break them apart. And chins aren’t stupid, so won’t try swallowing peanuts whole—they know to chew them first. But while a peanut won’t immediately poison or choke your chinchilla, it won’t be good for its health, so we don’t recommend feeding them.

Chinchillas enjoy eating anything new, sweet and/or fatty. They’re naturally inclined to eat high-calorie foods because these are hard to find in the wild—the same instinct that we have. So, if you offer your chinchilla a peanut, it will eat it.

The problem is that your chin doesn’t know what’s best for it. It’s in the wild, and it has unlimited access to hay and pellets. It doesn’t need to gorge on dense foods like peanuts. In that sense, peanuts are a lot like the chinchilla equivalent of the snacks and fast food that we enjoy eating (but probably shouldn’t).

Peanuts are nutritionally unsuitable for chinchillas. If fed regularly, they will make your chinchilla gain weight. And because your pet isn’t used to them, they could cause digestive issues like bloating, too.

To fully understand why peanuts have the effect that they do, you have to look at the specific amounts of each nutrient they contain. The table below uses data from NutritionValue.org. These data relate generically to unsalted peanuts, not one brand or another.

It should be immediately obvious that peanuts don’t give chinchillas some of what they need, and give far too much of things they don’t need much of.

The key issue with peanuts is that they contain far too much fat for chinchillas.

Contrary to popular belief, no one nutrient is the ‘enemy’. You shouldn’t entirely cut out carbs, fat, or anything else. Rather, the issue here is that fat contains more calories per gram than protein and carbohydrates (roughly double). As such, peanuts have almost three times as many calories as chinchillas need. This means that your pet will quickly gain weight if you feed it peanuts, even as a snack. The fact that peanuts have around 20-40% more protein than chinchillas need makes this problem even worse.

What else makes peanuts unsuitable is that they contain little fiber, or at least, less fiber than chinchillas need. Chins need a very high fiber diet, perhaps up to 30g per 100g. Their digestive systems are tailored to just such a diet. If your chin doesn’t get enough fiber, its stools may be soft or even runny.

Peanuts have lots of vitamins and minerals compared to other foods, both in terms of the number of different micronutrients they contain, and the amounts of each. Here is a table, again with data from NutritionValue.org, that lists each micronutrient that peanuts contain high amounts of:

This table may seem like a plus-point in favor of peanuts, but it’s not.

Chinchillas can thrive on a diet of hay and hay alone. That’s because hay contains every vitamin and mineral that chinchillas need to live healthy lives. That may seem surprising, but many animals don’t need a varied diet like we do.

If your chinchilla is deficient in something, peanuts aren’t an effective ‘supplement’. Rather you should talk to your vet about actual supplements. Take calcium, for example: timothy hay doesn’t contain quite enough, which is why chinchilla pellets often contain alfalfa, which contains lots. If your chin isn’t getting enough, the vet can recommend a suitable supplement. Or, you can give your chinchilla a cuttle bone as a chew toy. Both of these options are better than peanuts because they don’t make your pet gain weight or have digestive issues.

Peanuts aren’t poisonous for chinchillas. Your chin can eat one, and it won’t immediately get sick, let alone pass away.

Rather, they cause digestive issues. These take longer to appear than a poison would take to take effect. Peanuts, and any food your chinchilla is unfamiliar with, can cause bloating which is a dangerous problem for a chinchilla to face.

This occurs because a chinchilla’s digestive system is set up perfectly to digest rough fibers like those found in hay. The chinchilla digests its food twice over to extract as much nutrition from it as possible, and its gut bacteria and enzymes specialize in breaking down fibrous foods. While peanuts are reasonably fibrous, they are nowhere near as fibrous as hay.

When the chinchilla’s gut has to digest something it isn’t used to, the food can ferment. When this happens, it produces lots of gas, and since chins can’t pass gas easily, this gas gets trapped. So much can get trapped that the chinchilla’s gut or stomach lining can burst. While this won’t happen if you feed your chinchilla just one peanut, peanuts and other unsuitable snacks can contribute to an existing issue, or create an issue from nothing if fed regularly.

The statistics above relate to raw, unsalted peanuts. Every peanut has this much fat in it, that many calories in it (if not more), and isn’t suited to your chinchilla’s diet. That applies to peanuts you get in packets, peanuts you get in tubs, or monkey nuts that you get with their shells still on.

Salted peanuts are worse for your pet than raw peanuts. That’s because of all the sodium (salt) they contain/have on their surface. Sodium has negative health effects like raising blood pressure. It’s proven to increase the risks of kidney disease, stomach cancer and heart failure too. While these effects haven’t been proven in chinchillas specifically, they have been observed in other rodents, so are likely to occur in chinchillas too.

While peanuts aren’t suitable for chinchillas, peanut shells are.

Peanut shells are too tough and fibrous for us to eat. But it’s these qualities that make them the perfect chew toy for chinchillas. Chins need a chew toy to keep their teeth from growing overlong. Apple wood sticks are a common choice, and there’s no reason not to give these. But chinchillas enjoy having new toys and new treats: it keeps them entertained.

Peanut shells are a good choice because when chinchillas gnaw on things, they can accidentally ingest some by accident. That’s why it’s best to offer chew toys made from natural materials like wood. Peanut shells don’t contain the same high levels of fat and protein that peanuts do, which means they’re safe to ingest.

The same issues that apply to regular peanuts apply to peanut butter, too. Peanut butters have the same, if not higher, levels of fat and protein than raw peanuts. They have lots of salt added, too.

And besides nutrition, peanut butter poses other problems. If you got any peanut butter in your chinchilla’s fur, it would be a nightmare to clean out.

How Many Peanuts Can Chinchillas Eat?

We would recommend against feeding your chinchilla any peanuts, for the reasons covered above. On top of that, though, there are snacks that are perfectly suitable for chinchillas that won’t have these effects. Chinchillas enjoy these snacks just as much as fatty, sugary or generally unhealthy ones. There’s therefore no logical justification for offering unhealthy peanuts when healthy rose hips or herbs will suffice.

And besides that, chinchillas don’t need snacks to thrive or be happy. So even if there were no healthy snacks you could give to your pet, the logical choice would be to feed no snacks at all.

If you are going to feed your chinchilla peanuts anyway, do the right thing and limit the portion size that you offer. A sliver of one peanut will give your pet the fun of having a snack but with little chance of experiencing negative health effects.

How Often Can Chinchillas Eat Peanuts?

As a rule, you shouldn’t feed your chinchilla any peanuts. No matter the brand, whether they’re salted or unsalted, ‘organic’ or not they are all unsuitable for your pet in the same way. As such, you should consider feeding your pet chinchilla-safe snacks like rose hips, flower petals or sweet hay. These treats are cheap and easy to find, and are nutritionally suitable for your chin. 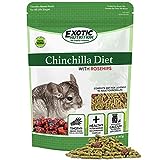 $14.99
✔ NATURAL - No artificial preservatives, colors, or flavors ✔ HEALTHY - Through long-term use, chinchilla owners experienced impressively low disease and death rates in their animals. ✔ RESEARCHED - Developed and refined as a direct result of close w... read more
(as of March 4, 2021 - More infoProduct prices and availability are accurate as of the date/time indicated and are subject to change. Any price and availability information displayed on [relevant Amazon Site(s), as applicable] at the time of purchase will apply to the purchase of this product.) 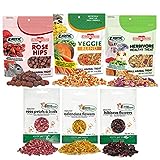 (31)
$26.99 ($1.50 / Ounce)
✔ 100% NATURAL - no added color, flavor, or preservatives ✔ HERBIVORES - Suggested for: squirrels, guinea pigs, rabbits, chinchillas, prairie dogs, degus, hamsters, gerbils and other herbivores. ✔ FORAGING - Small size enables you to put in toys to e... read more
(as of March 4, 2021 - More infoProduct prices and availability are accurate as of the date/time indicated and are subject to change. Any price and availability information displayed on [relevant Amazon Site(s), as applicable] at the time of purchase will apply to the purchase of this product.)

$15.99
✔ SUPPLEMENT - Vitamin & mineral supplement for chinchillas. ✔ PROMOTES DIGESTION - Includes live saccharomyces yeast for a healthy digestive tract. ✔ PROBIOTICS - Contains probiotics that prevent colonization of pathogenic bacteria. ✔ MULTI-USE - Gr... read more
(as of March 4, 2021 - More infoProduct prices and availability are accurate as of the date/time indicated and are subject to change. Any price and availability information displayed on [relevant Amazon Site(s), as applicable] at the time of purchase will apply to the purchase of this product.)